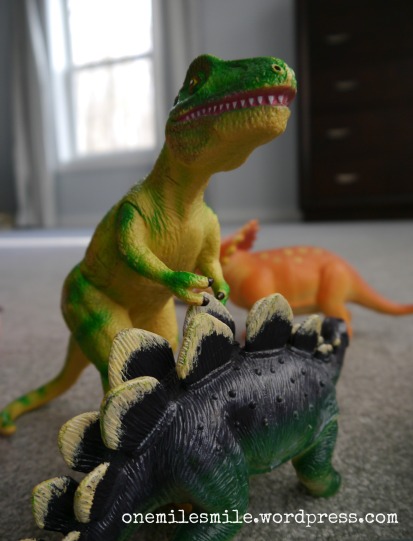 A recent conversation with my son:

S:  Is a whale bigger than all the land?

Me: No. A whale is bigger than our car, though.

S: Is The Hulk bigger than a whale?

S: But can The Hulk crush a whale?

Me:  Probably not.  Whales live deep in the ocean.

S:  Is a whale bigger than the ocean?

S: Then is a whale bigger than all the land?

And it goes on and on and on … And I love it. My son was a late talker, but he is attempting to make up for that now. If you give him the least bit of attention, he will talk your ear off.  His favorite topic right now is dinosaurs. He knows them all, even the less familiar ones like  Pachycephalosaurus, Mamenchisaurus, and Archaeornithomimus.  I stumble my way through the pronunciations, and he corrects me as I read him the same book … over and over.

Like many kids, he tends to develop slight obsessions with things he finds interesting. For instance, in early December, he became fascinated with buffalo after visiting the Washington Zoo.  My boy, who never remains still, stood in fascination for a good fifteen minutes watching the animals graze in the field. After that, it was a series of never-ending questions:  Do we eat buffalo? Are buffalo bigger than dinosaurs? Would a lion eat a buffalo?

Jumping on this newfound interest, I quickly ordered a buffalo stuffed animal to give to him on Christmas. When he opened the package, he grinned in excitement. I had momentary thoughts of this becoming his new favorite cuddle animal and how he would introduce the buffalo to his other favorite animals, seal and lion cub.

But, instead, he grabbed the poor, stuffed buffalo and immediately “fed” him to the gigantic T-Rex he also received.  Basically, I had just given him the gift of raw meat for his dinosaur collection.

As he plays, the dinosaurs viciously tear into all sorts of stuffed animals: buffalo, cats, chipmunks, and seals. No animal is safe in his Jurassic world.

During one of these prehistoric battles, my son looks up at me for approval.  I don’t quite know how to respond.  This play is so different than what I am used to.  I’m not sure what to do? Condone this violent behavior? It is only dinosaurs.  Applaud his resourcefulness in providing a nourishing meal for his dinosaurs? But, he is acting out death scenes! Gruesome ones!

I make a frightened face. He smiles, turns to his dinosaurs, and continues to sacrifice his animals to the meat-eaters.

I hope these looks for approval don’t stop. I hope I always know the right expression to show him. The one that says:  Yes, you are doing a good job. Yes, I will watch you – even when you are acting out vicious dinosaur death scenes. Yes, I will love you no matter what.

5 thoughts on “Feeding the Dinosaurs”

What I Write About

Feels like summer! ☀️ #playinthemud #creeklife #getoutdoors #summerfun #kidlife
A little water fun this afternoon. We decided math can wait! #playoutdoors #creeklife #crayfishhunting #homeschool #playinghooky
First it was dinosaurs 🦖 and then it was snakes 🐍. He dabbled in space 🌠 for awhile, but his new obsession is ... trees! 🌳 Yup. Trees. He used to just climb them, but now he can identify just about every tree on our property and on our neighborhood walk. 🌲 He reads the tree identification book for fun and spends his iPad time on YouTube watching, you guessed it, tree videos. This boy goes all in when he's interested in something. 🌲 Today he found this flower from a tulip poplar. "Mom, isn't this so beautiful!" Yes, it is, and so are you. 💙 #lovemyboy #playoutdoors #climbatree #tulippoplar #treeobsessed
Back to top
%d bloggers like this: